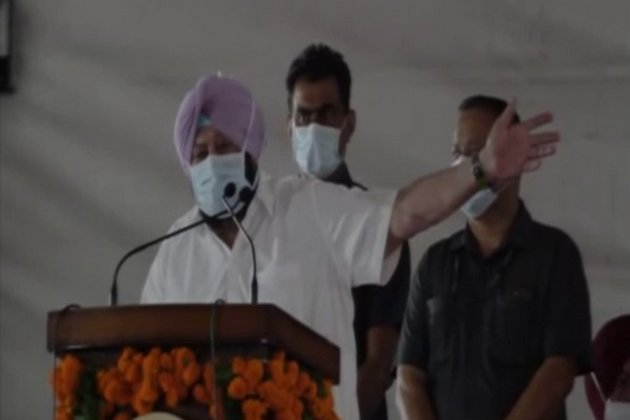 Hoshiarpur (Punjab) [India], September 13 (ANI): Punjab Chief Minister Captain Amarinder Singh on Monday appealed to the representatives of various farmers' unions not to hold protests across the state against the farm laws passed by the Centre as it is impacting the economy of Punjab.

The Chief Minister, without mincing any words, categorically said that farmers should desist from holding protests in a state which 'stood like a rock' with them in favour of their legitimate issues against farm laws passed by the BJP led Central Government and 'thrusted it upon them unilaterally' even without taking them into confidence.

"The ongoing protests at 113 places in Punjab by the farmers are not at all in the interests of the state, and has considerably impacted its economic development," he said while hoping that his request would be acceded by the farmers on agitation.

Further, Amarinder Singh mentioned that the farm laws have already been rejected in the state assembly and replaced by the state government's farm laws which were sent to the Governor for his accent, but "to our dismay, these have not yet been forwarded to the President of India".

He also claimed that anything within the purview of his government was done by him promptly. "A delegation of various leaders from these farmers unions met me recently at Chandigarh to get the price of sugarcane hiked from Rs. 325 to Rs. 360 per quintal and the same was accepted by me at once," he said.

Expressing concern over the inordinate delay in meeting farmers' justified demands due to Centre's apathy, the Chief Minister said that instead of holding protests in the state, they should mount pressure on Union Government to get these anti-farmer laws repealed.

Reiterating the state government's commitment to ensure the overall welfare of farmers, Amarinder Singh said that a new umbrella programme "Kamyaab Kisan Khusaal Punjab (K3P) Mission" during 2021-22 launched with an aim of improvement in the income of those dependent on agriculture on a sustainable basis while preserving the ecological balance for future generations at a cost of Rs.3780 crore to be implemented during next three years (2021-24).

"The state government has waived the farm loans up to Rs 2 lakh of 5.64 lakh farmers at a cost of Rs 4624 crore thus fulfilling another major poll promise," he added while handing over the debt waiver certificates to 75 farm labourers and landless farmers as a symbolic launch of this scheme in Hoshiarpur district. (ANI)